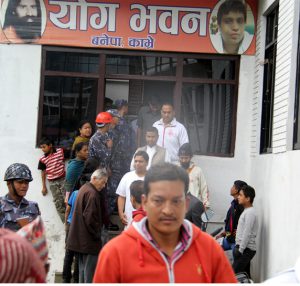 The atrocious tragedy of the earthquake in Nepal claims thousands of lives, thousands of people from around the globe. Fortunately, Swami Ji and Acharya Ji narrowly escaped from this terrible happening. In the disaster moment, Patanjali takes its moral duty to rise above from all the political and geographical boundaries and come forward with human sensation and feelings to serve who have suffered extensive devastation.

Patanjali’s hundreds of volunteers visited many places in Kathmandu and made arrangements for the distribution of water, beaten paddy (Chiwda), potato curry, fruits and biscuits. With the efforts of Patanjali, even in that terrible tragedy thousands of people were able to find a shelter, electricity arranged with generator.
Patanjali arranged 300-400 cartons of biscuits, 200-300 apple boxes, 200-300 sacks of beaten paddy (Chiwda),200-400 boxes of water bottles.With the energetic words of Swami Ji that people were firm determined to serve beyond their capacity ignoring repeated aftershocks, showers of rain, chills of Kathmandu.

A list of important required medicines were prepared by expert team of Patanjali doctors and medicine approximately worth Rs. 1 Crore were ordered immediately. Patanjali immediately constituted 20-30 teams for relief in affected remote districts to organize camp and continue these relief camps without any interruption till the life become smoother of affected peoples and also ordered to arrange food, tent, blankets, mats etc. in these camps.

Patanjali donatednearly 5 lakh feet mate that was spread inthat ground.This was an excellent example of Patanjali’s first service after devastation, the tent which was nearly 40 to 50 Lakhs worth, before the natural disaster, it had been laid to make life healthy, and same was now the stuff of the camp for the tragedy of nature survival being and became a boon of survival. Patanjali also arranged ground lights in the tent in few hours.

Thousands of volunteers of Patanjali are restlessly involved in the service to mankind. Patanjali with its associates has contributed an amount of rupees more than 5 Crores for relief work.Thousands of people from nearby areas being brought for treatment to Kathmandu,for all such people Patanjali arranged accommodation and food.